I walked in to hear the unfortunate news that Thelma Buchanan got sick and would not return again.  I’m not sure if that means that Thelma passed but I’m disappointed that I didn’t do origami with her more.

Today, I had a greater interested crowd than usual. I started working with Joan on the last origami cat that I could find on YouTube.  Joan showed her improvement through this origami as it was one of the hardest she has made.  During this, a new woman named Vicky sat with me and Joan. Since she was a beginner, I started her out with an origami dog. Since she has two twin grandsons, Vicky decided to make two dogs and two boat/sea backgrounds. Though she appears frail, Vicky has great enthusiasm, humor, and finger dexterity similar to Joan’s. While Vicky was doing origami, she snickered and laughed the entire time while demonstrating different facial expressions. Both Joan and Vicky’s origamis came out successful and they both enjoyed their time. Another lady named Jane came to watch as she was intrigued by the origami. She complimented our creations and joined in on the laughter. As a result, I gave her one of the cat hearts that I made with Joan and Jane was thrilled. 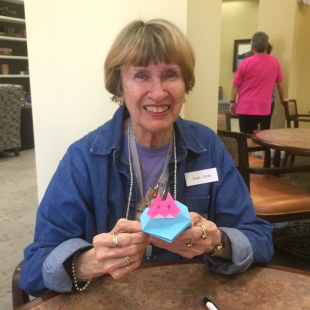