I entered the Heritage Memory Care and Assisted Living facility a bit nervous yet excited. As I entered, Eileen, the program coordinator, walked me to the dining hall where many patients were still eating lunch. I introduced myself to each patient and asked if they were interested in doing origami with me. Unfortunately, all of them said no. This was very disappointing since I was expecting a roomful of people to be interested in origami. I supposed America is much different from Japan. Nevertheless, two people were interested in origami: Robert and Thelma. Robert is the youngest patient at the facility and he used to be a computer engineer. However, since coming here, his home was taken from him and he has been going through some tough times. As a result, I am glad that he was interested in doing origami because origami really stimulates the brain and is related in engineering to many ways that will interest Robert. The first thing I taught Robert to make was a jumping frog. This was a huge challenge because most first-timers make a cat or dog. However, I wanted Robert to take the challenge so that he could see his true potential. After we created the frog, he was much happier and excited about origami and wanted me to return the next day. We also made a cat, dog, bird, heart, and pot. These were very easy for him. I was not expecting Robert to finish all of these creations so quickly so I actually ran out of diagrams. What I love about Robert is his enthusiasm for origami and the small chuckles he emits upon finishing each creation. As I said goodbye to Robert, I searched for the second person interested in origami: Thelma.

I entered Thelma’s room and sat on a chair next to her beside the TV. I introduced her to origami since she had never seen it before. She told me about how her Shih Tzu was taken away from her when she moved into the facility and I felt very sympathetic for her. What I liked about Thelma was that she had an optimistic approach towards the origami and was naturally inquisitive. Furthermore, she had a gleam of youth in her eyes while we conversed. Similarly to Robert, Thelma and I made a dog, cat, heart, and pot. Despite being frail, Thelma had great finger agility and was able to make precise folds. As a result, I am definitely ready to find more complicated diagrams for Thelma.

Despite the patients’ disinterest in origami, I am glad that I got to teach Robert and Thelma in a one-on-one session because I really got to know them and I want to help them improve their short term memory and finger dexterity through origami. This experience was eye-opening and I hope I can continue teaching origami for many more weeks. 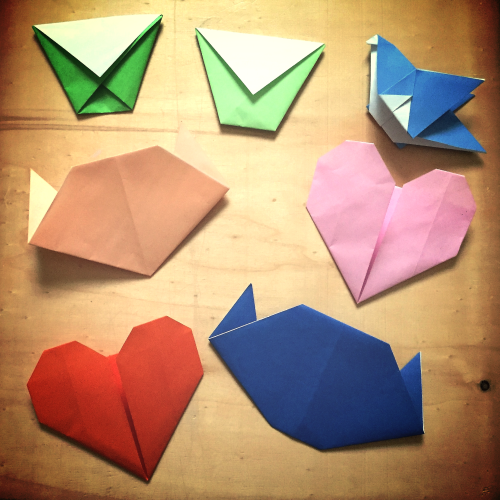